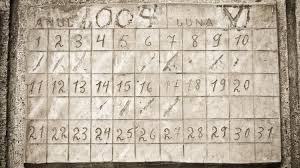 “Above all the oldest things in the world, However, and the end will come after all ".

From the "Polish and Ruthenian Calendar" by Jan A.. Danielczyk (Cracow, 1759):

“Years go by, times go by,
Compasses doomed another hour.
One summer, spring is bad for others,
After all, they say, the evil one will never please ".

From the "Polish and Ruthenian Calendar" by Antoni A.. Muszyński (Cracow, 1778):

The first sign is therefore called Aries, that it is covered with wool as an animal, warmly exercising, so the sun ascends in the sign, after intense colds, starts warming up the Earth. The second sign is called Taurus for this reason, as he is stronger than Aries, the sun, which plays in this sign, spreads its rays more strongly and effectively over the earth. The third character has the surname of Gemini. The remaining sun is so warm in it, that and young children, with flowers that come out the most amused at this time, albeit in clothes not bearing, they can bear the air.

The fourth character has the name of Cancer, how much the sun is rushing to this place, which left, returns, in which Cancer imitates. That in July, peculiarly with rising Sirius, the heat is the greatest, to these expressions the fifth sign Leo is taken, power and heat among all the best animals.

The sixth mark, Put, means, that when the sun is there, as if infertile, earthly fruits do not grow, but only to maturity they come.

The seventh sign, Scales, lets know, that in September, night and day equal, at the beginning of this sign of the sun, hours are timed out.

The eighth sign, The bear cub, a thin sting expresses the return of cold, bodies in the shape of a finished spear through summer piercing dresses.

The ninth mark, Sagittarius, the time for hunting turns out to be the most decent.

From the tenth mark, The goat (Capricorn), bring need, that he climbs rocks and rises to branches, yes The sun in December, taken over by frost, and therefore hard, the earth and waters frozen with a thaw, and at noon he rises higher.

The Eleventh Mark The Pitcher (Aquarius) said, that ice-covered water in only some places so sparingly, like from a pitcher, coming out.

The twelfth sign is Pisces, because at this time, after the flow of ice, they begin to show themselves ".

“The two circles of the world have their government:
The sun in the sky, and the penny and water and land ".

"Fault, the grains suffer harm,
Winter for snow when it gives water ".
“Dry March, and may cool,
April is wet, year hungry ".
“Warm and rainy summer,
Yield signs obvious ".
"Autumn, when it maintains its leaves for a long time,
A terrible winter sign of course ".

From the "Calendar of Polish and Ruthenian" by Jan Kanty N.. Sucharzewski (Cracow, 1757):

"Do not be angry, that I am writing the truth, the host,
That you often saw the harvest in the calendar,
And apparently you didn't take it straight away -
Now you have thistles and weeds in your profit ".

From the "Polish and Ruthenian Calendar" by Jakub F.. Niegowiecki (Cracow, 1754):

“In China, Suchien Province, there is a bird, from a certain flower, Tuchon, from which he is born, named after Tuchonfung, all the colors of the flower presenting itself, in the air like a flower of summer. This bird can only live, and cover that flower, from which he was born, stays in his vigor…
On the island of Florida, people like that are speed, that in the course of the deer they pass. There are people in the Negro land, called Azanachi, with the bottom lip hanging elbow to the ground. In the land of Tartar a certain people have such large ears, that all man will cover himself with them… There is an animal in Libya, whose food is always on 11 the parts are divided, which 10 devours, and the eleventh is preserved for a long time…
In Scotland, instead of wood with stones, for greasiness, that they have inside, they burn in stoves and cumin ".

From the "Polish and Ruthenian Calendar" of Józef I. Meyzla (Cracow, 1768):

“In Syria, near Damascus, there was a dragon of such great size, that he swallowed the rider with the horse. The lengths of his feet were counted 240, whom Possidonius saw "…

From the "Calendar of Polish and Ruthenian" by Jan Kanty N.. Sucharzewski (Cracow, 1760):

"Always have fire in the urgent, human, a cautionary tale, So you stay home, so you are on your way.
To whom this guest will only come,
To him with all his fortune, sometimes from life - Kwita ".

„1. The Polish months are denominated by certain terms and circumstances, as January, that she is in contact with the past month, which was also blocked (not knowing how to write), that is, stations are marked on the consistency of winter troops, which is called stativa. February supposedly constituting ice cream, that a soldering was needed over the harshness of winter, for better clothing, why the old proverb: More shoes in February. March retains the name, part of the former Mars, that Mars expeditions were ordered during it; part, that for the frequent change of air one dreams- month, that is, old people want to dream or dream and they often die in it.

2. April is called for flowers and blooming trees emerging very early. May is called from green, when the military shawls had something to dream about, it is from sun pledged and dark for your convenience to do. June named, that worm, the red in question, most at this time it rolls trees and multiplies in it by the operation of the hot sun…

3. July is named after linden, during which fertile dew is dropped on the linden trees to allow bees to take honey, and therefore the honey then picked up in July is called, very front. August from the sickle is called, that this month, what's live, it takes to harvest, so that the grains of the field may be harvested. September from September, aka heather, badela or chrost is called…

4. October is the name of the chaff from Cierplice and the chaff from the harvesting of flax and hemp this month. November was counted from the leaf of fall, the letter seems to fall, I know.

From December, from December, the dragged mud is called frost. These first names took months from the common folk to speak Polish, when there were no teachings or calendars yet, only after the new month they measured themselves ".

From the "Polish and Ruthenian Calendar" by Maciej J.. Tra-janowicz (Cracow, 1755):

"You want, lest you know diseases, measure everything, It is easier to overcome all infirmities. Temper your anger, baby throw aside, Mediocre food and drink as a defense ".

Health in those in better shape, what they used to ventilate the apartment.
Filthy Aversion Creates a multitude of diseases in the body.
Above all, keep in mind:
Do not eat or drink unwillingly.
Frequent washing, cancer, face
He loves health and humor.
Abuse of spicy drinks,
Their strength was weak, shortens life.
If you want to live well for a century,
Do not drink cold when you sweat.

"Child, which will be born in January, cold nature will be. In February - it will be poor, scabies with white skin will have, and he will be a thief. In March - sudden will be in your mind, and many will fear him. In April - it will be infertile. In May - dirty, yet he is prudent. In June - it will be silly, he boldly takes no seriousness, what it should do or say. In July - it will be cheerful and clean. In August - albeit a clear mind and a simple one, yet he will be barren. In September, she will be modest in all her deeds, a just judge. In October - bad nature happens, and an unpleasant thing. In November - a functional shooter, and he will be a wise and good man. In December - he will be a fair judge, strong and fat body, he will also be clever. "

• Not everyone, who wears a beard, he is your grandfather. • Only the last fool praises his own child. • Don't be unflattering about yourself. Your friends will do it for you.

• Time - a divine doctor for all concerns

• Time is the father of truth 0 Time will prevail

• Only in hoops, when the time is short

• Enjoy your time, while time

• Where the sun shines, there must be a shadow

• One Sun is enough in the sky

• The sun does not shine alike for all

• To whom the moon shines, ago and the stars shine

• The moon and fortune are not always full

• Period in a circle, in three days the water is down

• Man is the servant of time, and time is man's enemy (Arabic)
• Since you are killing time - do it humanely (soviet)
• You cannot stop time with your hands (bengalskie)
• Time, which we have, it's money, which we don't have (American)
• Time costs gold, but you cannot buy time with gold (chinese)
• It will come to this sometime, that even a tooth of time can be replaced with a prosthesis (Hungarian)
• Time stands still, we are running (English)
• Each time has a face (Old Polish)

Stanisław Jerzy Lec: Time does its job. And you, Man?

Albert Einstein: There are a thousand ways to kill time, but nobody knows, how to revive him.

Leo Tolstoy: Time is rushing? We are not following.