The beginning of the year 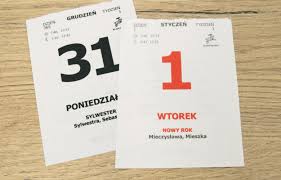 According to the Gregorian calendar, we celebrate the new year 1 January. It is a new year celebrated in most countries of the world. However, approx 20 calendars, which set the first day of the year for different dates.

Our new year is celebrated from 45 r. p.n.e., so since the introduction of the Julian calendar. After the victory of Christianity, the church initially fought against the New Year's celebrations 1 January (were related to the god Janus). With time, however, he "baptized" this "pagan" new year, establishing on the octave of Christmas the Feast of the Circumcision of the Lord. Thus, medieval calendars started from 1 I.

The beginning of the year in some European countries of the early Middle Ages was the first day of March. Its genesis was in the great military rallies organized by the Franks, the so-called. "March fields". Pepin Little (714—768) but he transferred those "fields" to the day 1 V, at the same time closing the March beginning of the year.

With the day 1 March also began the official year in Venice, where the "March style" lasted until the end of the Republic of Venice in 1797 r. The beginning of the year in March was also widely distributed in Russia. Starting the year from that date was an ancient custom of the Eastern Slavs. Beginning of the year from 25 brand, called "Annunciation style" (from the feast of the Annunciation of the Blessed Virgin Mary, on that day) was established in Italy.

"Easter style" (counted from Good Friday or Holy Saturday of Holy Week, preceding Easter) called mos Gallicus (French) or stilus francicus, he was staying in France, It was the most uncomfortable beginning of the year, due to the constant advancement of the date of Easter. The years were unequal, and some days either occurred twice, or… at all.

Beginning of the year from 21 September was widespread in Byzantium and in the countries dependent on Byzantium (Byzantine style). In southern Italy, it survived until the 16th century. It was in force in Rus from the 12th century. to 1 I 1700 r. (when the Julian calendar was introduced in Russia by the edict of Peter the Great). Beginning of the year from 25 of December (styl a navititate) it was widespread in the Middle Ages. It was used in the Roman curia for a long time, as well as in some Italian cities and countries. In England, from the eighth to the thirteenth century. He was also popular in Germany, Scandinavia, Czech Republic and Poland. In Poland - next to the a circumcisione style, i.e.. from 1 January. But it was still present in the 14th century. Od XV w. a circumcisione style gained the advantage, however.

So how do we see, every calendar is a different beginning of the year. It was like that in the past and it is like that today. Even in countries, which adopted the Gregorian calendar, because old customs are respected.

Here's when (converting to our calendar count) was celebrated e.g.. New Year 1977 in countries, which use calendars other than ours:

• At Arabs, using the Muslim calendar, 12 XII. The year also began on that day 1398 the Mohammedan era.

• In Japan, where (next to the Gregorian calendar) the population also uses the old Japanese calendar - 1 I, so how with us. On that day, however, it began 2637 r. Japanese Era.

• The months of the Gregorian calendar are unequal.

• No permanent relationship between the date of the month and the day of the week.

• If the year starts on eg. Thursday, it ends on thursday (except for a leap year: then Friday is the last day of the year).

In fact, we have more than one, but… 14 calendars, and so - 2 times that, how many days in a week! So many calendars also need to be printed, to find the right one for each year. It is also difficult to predict in advance without looking at the calendar, how many working days there are in a given month (you cannot use the last year's calendar). And then there are movable church holidays, which are included in many calendars of different countries. In a word - this one calendar it's not that convenient at all, as T. thought it. Boy-Żeleński. There was a lot of embarrassment with him, and much remains to this day.