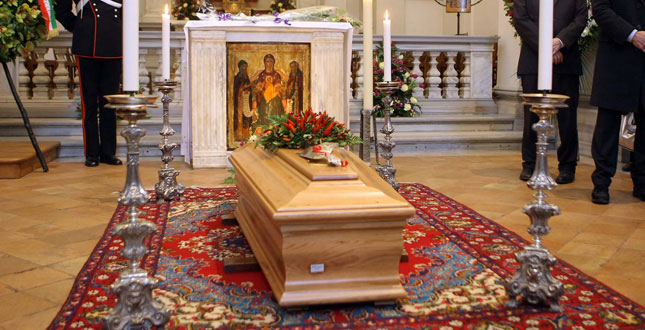 The last rites. When it is known already, that the days of a sick person's life are numbered, the family calls the priest, who gives the dying person the last sacraments (the last rites). A crucifix and a burning candle should be placed on a table covered with a napkin. The priest brings holy water and oils, and he anoints by putting oil on the feet and hands of the sick person. The family gathered at the bed praying with him.

Removal of the body and funeral. During the removal of the body, the priest blesses the mortal remains of the deceased. Funeral ceremonies are held in the church. The family accompanies the deceased, driving a hearse, who carries the coffin. In the countryside, where the house of the deceased is often located near the church, it happens, that family and friends follow the hearse. Then the procession begins with the closest ones.

Weeds (Fringe) shroud. Old, a forgotten custom dictated, to friends (but not relatives) of the deceased, proceeding in a conduction by the coffin, held the edge of a black shroud covering it.

In the church. The coffin is in the center of the nave, in front of the altar. You can fold a pillow on the catafalque, and on it – decorations of the deceased.

The closest family takes their places right in front of the catafalque. The men sit down one at a time, and the women on the other side (this custom is no longer observed today). Kościelny shows places for members of extended family. The funeral is the only ceremony, in which everyone can participate, even if he wasn't invited.

The funeral service is followed by a blessing. Participants of the ceremony, regardless of your own faith, they should be focused, exercise due seriousness and silence. Going to the funeral, you should choose a dark and calm outfit, avoiding bright colors in particular.

Condolences. In some countries (let's mark, that there is no such custom in Poland) after the end of the mass, the relatives of the deceased stand next to the coffin, and all the mourners behind the churchyard pass in complete silence in front of the catafalque and one by one, handing over a sprinkler, they make the sign of the cross over the coffin. Approaching relatives, bend their head slightly in front of these, they don't know, and they give their friends a hand or kiss them. Just say a few words: "I loved your mother, as if she was my relative ", "I feel sorry for you with all my heart".

Signatures. A grieving family may choose not to pass the mourners in front of the coffin for various reasons. Then the church priest or the priest celebrating the mass informs the gathered people, that relatives are asking for no condolences. In such a case, funeral attendants write down the book at the entrance to the church, giving your address, so that the family can send a thank you for coming to the ceremony. (Custom in Poland not used.)

Taking the body to the grave. In France, apart from the family of the deceased, only the closest friends go to the grave. Virtually everyone in Poland does it, though it happens, that we limit ourselves to participating in the memorial service. The mourners follow the coffin – the procession is opened by the church carrying the cross and the priest, right behind the hearse (it is rare nowadays, for the coffin to be carried, although in small cemeteries this custom has survived) members of the immediate family are going, further, in concentration and silence, other mourners. Everyone stops at the grave, where the priest says a prayer and blesses the coffin for the last time. After the coffin is placed in the grave, those present throw flowers and soil on it, next, after closing the tomb, they express their condolences to the family.

Tombstones. On the tombstone (or a blackboard) the names and surnames of the deceased are carved out, their dates of birth and death. You can also write a verse from the Gospel on it, however, overused formulas should be avoided, and through this – common.

Funeral Mass without a coffin. If the funeral was away from the place of residence of the deceased, the family orders Mass at a later date. This usually happens shortly after the funeral, and information about the mass is printed in the newspaper, among obituaries. The service does not differ much from that at a funeral.

Mass on the anniversary of death. They are celebrated on the anniversary of their death (at the request of the family and for an appropriate fee) masses for the deceased. And this time – if we wish, for acquaintances and friends to attend the service – we can put an advertisement in the newspapers:

12 of August, on the first anniversary of his death

will be checked in at. 8.00 in the parish church…
devotion for the peace of His Soul.

Let's add, that in Poland, if a significant number of friends and acquaintances attended the funeral, in the obituary section, the acknowledgments of the deceased's family are printed. You can do the same, when the closest ones were provided with support and help. Condolences from friends or colleagues are posted in the same section.