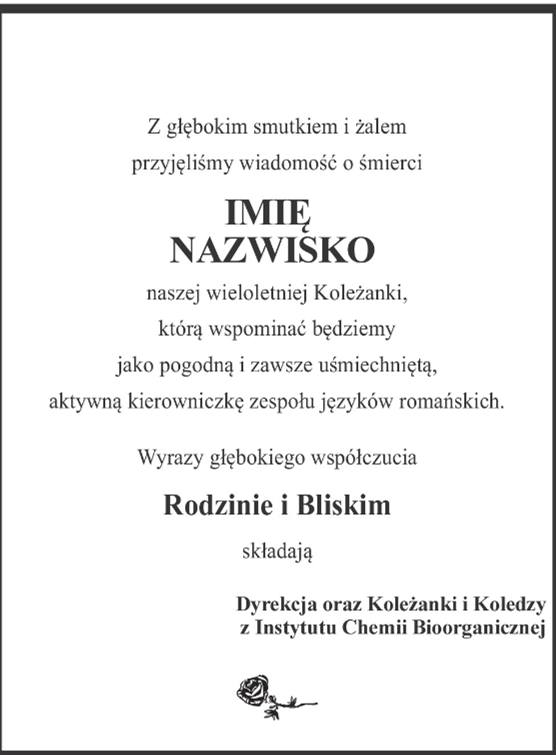 The deceased's family notifies their friends by letter, by telegraph or telephone.

In former France (during the ancien regime), Callers walked the streets of the city, drawing the attention of passers-by with a bell, informed about the death, and they also reported the day, time and place, in which the mourning ceremony will take place. Today there is an obituary in the newspaper. It can be edited in various ways, in a more or less personal way. E.g:

Immersed in deep regret, we announce, that on 1 September 1992 year she died (nagle, after a long and serious illness) at the age of … years,

The memorial service will be held on 4 September

at 9.30 in the church of St.. Wojciech, after which the corpse will be taken to the family grave at the Powązki cemetery

husband, daughter, syn, daughter-in-law, son-in-law and grandchildren
(or husband and children with their families).

You can also write, "He's gone forever…" or, if the family is religious, “He fell asleep in God…”, "Endowed with the Holy Sacraments".

If the funeral has already taken place, and only the closest ones participated in it, Can add:

The closest ones are notified about the death:

2. children and their spouses

3. grandchildren and their spouses, as well as other descendants

5. fiancée or bride of the deceased(go)

6. other descendants of the deceased and his spouse

8. nephews and nephews (the deceased or his spouse)

If the family is large, The list is closed by listing brothers and sisters with their spouses. Adopted children are exchanged alongside the relatives. Names (if the names of relatives of the deceased are mentioned) relatives are given first, after them, the names of the spouses and the surname of the couple. Brothers and their wives are named after the sisters and their husbands (brothers and sisters are exchanged according to the rules of seniority). Former spouses, who have lost their bond with the deceased as a result of divorce, is not mentioned in obituaries. Noble titles are given. If the title of the deceased passes to one of the persons signing the notification, she does not use this title until the funeral. In press obituaries, the functions or offices held by the family members of the deceased are very rarely mentioned, however, military ranks are given for senior officers.

The company may also inform about the death of an employee:

The practice of sending printed death and funeral notices is waning. (There are obituaries in daily newspapers and hourglasses popular in Poland.)

Condolence should not be made over the phone. We do this in writing. Condolence letters should be sent as soon as possible.